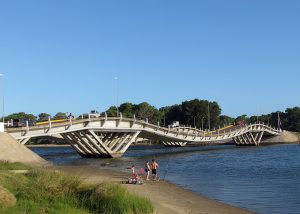 Punta del Este, founded in 1907 is a city and resort on the Atlantic Coast in the Maldonado Department of southeastern Uruguay. It is a very well-known tourist destination for both locals and foreigners.

As with most coastal cities, there is a beautiful long walkway along the beach through the harbour and farther along on the other side. Restaurants are plentiful as are visitors in the summer season. Many day visitors come ashore from 230+ cruise liners that visit the bay in the summer months.

In late July through to October, the whales can be seen playing in the bay. There are many things to do and see in Punta del Este such as Gorriti Island, Casapueblo, The lighthouse, Church of the Candelaria, Island of Lobos, walks and other excursions as well as endless beaches for those who love to tan and swim. Punta del Este has something to offer for everyone.

How to Earn a Living in Uruguay

How to Earn a Living in Uruguay